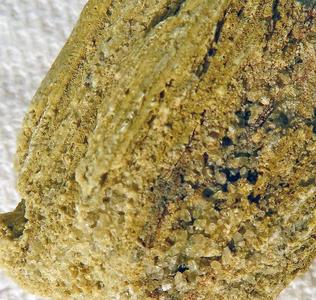 It was the first day after several months when the temperature reached seventy degrees, so Peg and I drove about thirty-five miles north to our favorite fish restaurant in southwest Louisville. Since Covid-19 was still running rampant in Kentucky, we called in a pick-up order from the parking lot and ate it in the safety of our motor home.

Then to burn off our big meal we walked along the River Walk, which is a paved walking and biking path that runs for several miles, both north and south behind Mike Linnig’s Restaurant, along the top of a tall levee. The levee holds back the Ohio River during flood stage, protecting businesses, homes, streets and roads in this section of Louisville. As we walked north we saw an area where people had been illegally dumping trash on the river side of the levee. It had been years since we’d poked around dumps back in the early 2000s when living in New Hampshire, so the lure of discarded furniture, broken electronic equipment, clothing, building materials, and much more was hard to resist.

Once we started looking over the trash, we saw an interesting building down by the edge of a steep drop off to the river. As we approached the abandoned building, we could see that it was surrounded with trash and hundreds plastic bags of household garbage, furniture, building materials, clothing, and unidentifiable plastic.


But what really caught our eyes was the expanse of river rocks that made up much of the ground near the building. The rocks had been tumbled until most were smooth. There was a wide assortment colors, shapes and textures in the several hundred square feet of river rock. We found igneous, metamorphic, and sedimentary rocks, and also coral and bi-valve fossils; many worn and smoothed over time by the river. Upon close inspection we also found small calcite crystals imbedded in a coral specimen. Nothing that we found was particularly valuable, but since we hadn’t been looking for rocks, minerals, or fossils for months, we were happy with what we picked up.

It is important to understand that collecting rocks doesn’t always require pre planning and it doesn’t require travelling to exotic places, mines, or mountains. But having a curious mind and keeping your eyes peeled will often provide you with interesting results. Don’t forget to bring a magnifying lens to get a closer look at what you find.

Some of our interesting finds. 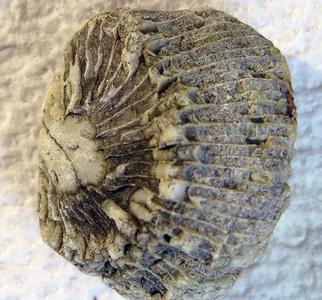 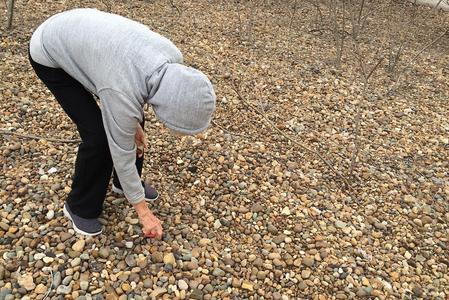 This will be a section of the website where club members offer their experiences, etc. for club members to read about.

Six members of the Withlacoochee Rockhounds

Six members of the Withlacoochee Rockhounds; Mark and Leslie, Dave and Susie, and Pat and Sandi made the annual trek to Yankeetown School in Levy County to update and replace the science displays in the school library. This past year because of the Covid virus we were unable to do the fossil and rock programs we normally do for the 5th grade science classes.

However this year we were able to at least come in on a “teacher’s day” and update the display.

The display features the fossils, artifacts, and items the kids are learning about in their science classes.

Two years ago in addition to dinosaur and Florida fossils and a few mineral specimens (Limestone and Phosphate of course) we had a NASA space coast display in one of the two cases that are dedicated to us.

This year in case one we have placed Florida fossils. Here is a partial list of what’s there in the first case.

On the left is the shoulder blade of a Woolly Mammoth. It was found in a sand pit northeast of Lakeland in the 1950s.

When we replace it next year it will have to undergo stabilization because when we were placing it in the display a small piece broke off. Had I noticed it, I would have stabilized it before we put it in the display. (Right now Pat and I are working on stabilizing a Mastodon Tusk to put in a display.)

To the center are several land mammal models, a giant sloth and several other extinct critters that were common here in Florida. Included are part of their remains that had fossilized over the thousands and in some cases millions of years since they were alive. To the right are a Tapir jaw and a tooth along with two “wolf like” critters fighting over dinner (or lunch). Of course no Florida exhibit would be complete without a few extinct horse fossils.

On the upper shelf are several piles of ancient horse fossils, mostly legs with a few joint fossils. These are not fossils of modern horses since modern horses have not been in North America long enough to have fossilized, with the exception of a one or two found in a heavily mineralized spring on the east coast.

All of the fossils are from Florida and most of them are from the Withlacoochee River which flows about 300 yards south of the school. Our thanks go to Kelly Johnson for help in replacing many of the Florida fossils we had used in previous years. I had loaned many of my Florida fossils to a dive shop to demonstrate what could be found on their dive trips in the Withlacoochee. When they closed the shop my fossils disappeared (imagine that.)

Just to keep “rocks” in the picture this year since there are no Florida minerals or rocks, we included a “rock apple” for the science teacher (available at many “Florida” rock shops.)

In case two we have placed a “Dinosaur” exhibit featuring the mighty “Spinosaurus.” In the exhibit in addition to a small model, the reconstructed jaw of a juvenile Spinosaurus (made by Dave) with real fossil teeth from North Africa is displayed. The key word here is “juvenile” because the adult jaw would be much larger and probably not fit in the case. If you can see it, the small model has a large fish in its mouth. This is because the latest data says that the Spinosaurus spent most of its time hunting in the water. The Spinosaurus is thought to be the largest theropod (meat eating) dinosaur to have ever lived, standing 14 to 23 feet tall with spines on its back 7 feet high. It was 52 to 59 feet long (some argue, seriously, it was only 44 to 47 feet long.) But, in my humble opinion, when discussing a critter that lived between 79+/- and 110+/- million years ago and has only been reconstructed from fragmented fossilized pieces, unless it affords a better, solid, understanding, arguing is a bit petty. Also in the Dinosaur case is a scale model of a Velociraptor skeleton which was found in China. Resin casts of the claws and teeth show the scale of the raptor which was about 6 feet long and 3 feet high and was mostly neck and tail. Their main body was about the size of a large turkey weighing in at about 33 pounds, not the large raptors shown in Jurassic Park which were more the size of a small Utahraptor. Don’t sell the little raptor short, my son has Jack Russell Terriers and by themselves they don’t pose much of a danger but, he has about seven of them and when taken as a pack I wouldn’t want to be an unfortunate burglar who happened to break into the wrong house. Also on the Dinosaur side are scale cast models of the North American Utahraptor’s claws which can be compared to the model of the

Velociraptor’s claw sitting in front of the model skeleton.

Thanks goes out to Pat and Sandi who took the time to label each fossil with a marking pen to be sure their ID was not lost if they get moved around. Leslie, Susie, and Sandi got down on the floor behind the cases to set up the display insuring each fossil was where it was supposed to be to match the description list.

And they adjusted the fossil books the kids can checkout to learn more about the fossils and added that artistic touch that makes a display pleasant to look at.
If they ever open up the school to visitors again I would recommend a visit or even better, volunteer when we are working on another display.
Mark Moore 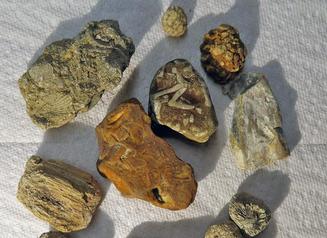 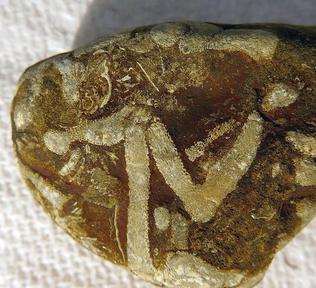